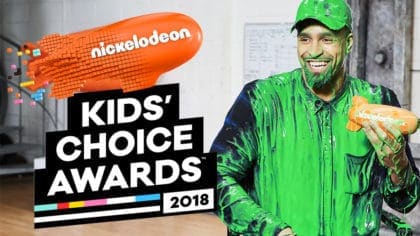 Ashley from Diversity is going to get slimed at the Nickelodeon Kids’ Choice Awards!

Fellow Diversity members Jordan Banjo and Perri Kiely slimed him! That was as he accepted an honorary Kids’ Choice Award for ‘UK Inspirational Role Model’ the other day.

The award was given to him in recognition of his career as one of the country’s most creative entertainers.

“It feels incredible to be receiving the KCA Slime award. I don’t do anything for rewards so it’s nice to be recognised, it’s a lovely feeling. I’m going to keep my orange blimp pride of place in Diversity’s studios for everyone to see!”

You’ll be able to see the full video of Ashley being slimed during the 2018 Nickelodeon’s Kids’ Choice Awards on Sunday 25th March at 10:30am on Nickelodeon.

The awards are going to be hosted by WWE Superstar John Cena for a second time.

Coldplay, Daisy Ridley, Ed Sheeran, Harry Styles, Millie Bobby Brown and The Vamps will all be there performing and so will JoJo Siwa.