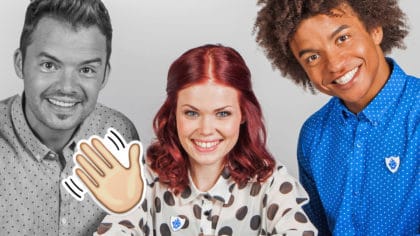 He first made the announcement during a show a few weeks earlier and declared yesterday to be his last day.

The entire show was Barney-themed and packed with best bits, challenges, and an emotional goodbye…

In the first part of the show, Barney attempted a motorised dance routine in some very fancy cars, then looked at some of your goodbye messages…

On his first show, Steve Backshall introduced Barney to some frog friends. If you didn’t know, Barney is terrified of frogs!

Blue Peter is all about pushing your limits and trying new things so the team challenged him to kiss a frog live on TV… which he did!

Then things got really emotional. It was time so say goodbye.

The Blue Peter Gold Badge is awarded to people who do amazing things and it’s tradition to give departing presenters their own.

On behalf of Lindsey, on behalf of myself, everyone at Blue Peter and everyone watching the show, thank you. And here is your very own Gold Blue Peter Badge.

Which, in classic Barney style, he then dropped!

From disastrous dives to funny fall fails, Barney’s been all over the world presenting on the telly and has kept us thoroughly entertained.

I was the kind of person that would always say ‘no’. Since I joined Blue Peter I’ve realised that you don’t know what you’re capable of until somebody actually pushes you. It’s okay to be scared, it’s okay to be frightened about trying new things but you absolutely must.

Yesterday he said he would also be leaving CBBC as well as Blue Peter. He’s been on the network for sixteen years.

We’re not sure what Barney has planned for the future but fingers crossed he returns to the telly soon!