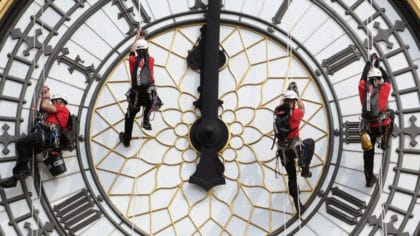 Earlier today, Big Ben chimed for the last ever time this decade! The next time you will hear the bells might be 2021…

Elizabeth Tower, the building that holds the Great Bell known as Big Ben, is in desperate need of repair.

The tower is so old it is literally crumbling with some of it even slipping into the Thames River!

In order to repair the tower, the bells need to be turned off so that it’s safe for people to work on it.

The work includes putting in a lift and repairs to the clock’s hands, mechanism, and pendulum. It was expected to cost £29 million but MPs have raised concerns that it could be almost double that.

If Big Ben’s iconic bells were left on, it could damage the hearing of the workers or get in the way of them talking to each other.

The bell’s hammer mechanism – the thing that makes it ring – will be locked in place, to prevent any regular chiming. The clock will still tell the time though, even when it has no hands!

The people who manage the clock use a giant projector to project fake hands on to clock when the hands are taken away for cleaning.

The clock first ‘bonged’ in 1859 and it’s not the first time Big Ben has fallen silent… Maintenance in 2007 meant that the famous bongs stopped and it was halted in 1983 for repairs too.

It has been stopped at other times too, including during war, but this will be the longest.

This essential programme of works will safeguard the clock on a long-term basis, as well as protecting and preserving its home, the Elizabeth Tower.

Some people are really unhappy the chimes will stop. The Prime Minister said she would urgently look into it and one politician said it was ‘entirely bonkers’!

Playing: the bare necessities (from the jungle book) by bill murray & kermit ruffins