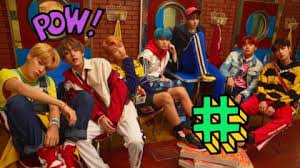 It’s the music video for their new single DNA and it’s already got over 100 million views!

If you’ve never heard of BTS before and are wondering where they’ve come from, don’t worry cause we’ll tell you everything you need to know about the group below!

They’re also known as the Bangtan Boys or Beyond The Scene.

They’re a mixture of singers and rappers – and they’re all amazing dancers!

BTS are basically the One Direction of Korean pop (except these guys haven’t gone on a break!)

Yep, these guys are HUGE!

But you might not have heard their songs before – because BTS sing in Korean they don’t get played as much in the UK but that could be about to change!

In America, BTS have just become the first Korean group to have a Billboard Top 100 hit!

The only other Korean pop act to have a song higher in the charts is PSY!

BTS songs tend to be a mix of hip-hop, R&B and dance music.

And then their new single DNA sounds like a Calvin Harris tune!

So yeah, each one’s quite different!

What are BTS’ real names?

What are BTS’ fans called?

BTS fans are called the BTS ‘ARMY’ and they really love their group!

At the 2017 Billboard Music Awards in the US, BTS walked away with the prize for Top Social Artist.

That because the ARMY cast a whopping 300 million votes for BTS to help them get the award!

Are you a fan of BTS? Do you think DNA should be played on Fun Kids Radio? Let us know in the comments below!