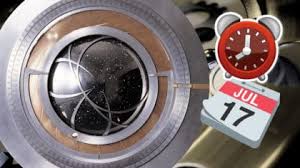 In the middle of the desert in America, some people are building a really, really big clock.

Their hope is that the clock will last for 10,000 years and act as a sort-of time capsule for people of the future!

The designers have had to be very careful in building the clock because it has to last for such a long time.

Engineers have tried to make it without using precious materials or relying on things like electricity.

They’ve also had to think about natural wear-and-tear of things like the clock’s hands and moving parts, which could break down in as few as a couple hundred of years.

The clock is designed to tick once a year with a ‘cuckoo’ coming out every millennium, which is 1,000 years.

When the clock finally opens, visitors will be able to wind it up and hear chimes! Everyone that visits the clock will hear a different set of chimes because they’re designed to never repeat.

The clock keeps time with a massive pendulum and corrects itself every-so-often using the sun.

Danny Hillis, the designer behind the clock, hopes it will encourage people to think more long-term instead of just a couple of generations ahead.

I want to build a clock that ticks once a year. The century hand advances once every one hundred years, and the cuckoo comes out on the millennium. I want the cuckoo to come out every millennium for the next 10,000 years. If I hurry I should finish the clock in time to see the cuckoo come out for the first time.

It’s part-funded by the person who created Amazon and a popular musician called Brian Eno!

As well as showing the current year, the clock-face also keeps track of the sun, moon, horizons, and night-sky.

Further down the machine is a normal 12-hour clock, which shows the normal time.

That’s to make sure everything is working as it should.

A prototype of the Clock of the Long Now is currently on display at the Science Museum in London.

Playing: just for me (from space jam: a new legacy) by saint jhn feat. sza

Butterflies and football in AQ