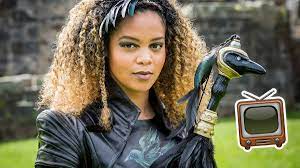 A brand new series of Raven is back on CBBC after almost 7 years!

Raven is basically a fantasy themed gameshow, played and filmed in Scotland where contestants have to complete really extreme challenges!

It was originally presented by James Mackenzie and although he features in this series, we’ll mainly see Aisha Toussaint on screen.

The new series of Raven will feature four heats with four children competing in each.

In each heat, the contestants get their own warrior names and fight under the banner of a formidable beast – the Bears, the Wolves, the Wildcats and the Stags.

Warriors must win as many golden treasure rings as possible by taking on a series of challenges.

At the end of the whole game, one eventual winner will be named Raven’s True Warrior!

More than 2,500 children auditioned for the TV show with only 32 being successful. Those kids come from all across the UK, as far north as Orkney and as far south as the Isle of Wight!

Technology not available during filming of the original Raven makes the new series really exciting.

The camera operators were able to capture new aerial shots with a drone and had an additional action cams positioned around the games.