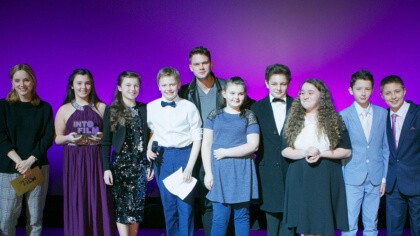 Every year the awards celebrate the very best filmmaking talent from schools right across the UK.

There are awards handed out for documentaries, film clubs, animation and loads more!

Plus Into Film have just announced that Alex Zane will be hosting the awards this year and they take place on Tuesday 15th March 2016.

Alex commented; “I’m delighted to host the 2016 Into Film Awards. The Awards are a fantastic opportunity to celebrate the achievements of young filmmakers and enthusiasts across the UK. I think it’s an incredible platform that encourages and supports young people to develop their skills and pursue their passions, enabling them to become the next generation of top British creative’.

Head back to the Fun Kids website next week to find out the winners!

Best Live Action by 12s and Under

Best Live Action by 13s and Over sponsored by Universal Pictures

Into Film Club of the Year: 12s and Under

Into Film Club of the Year: 13s and Over sponsored by SONY Pictures

Best Animation by 12s and Under

Best Animation by 13s and Over

Best Documentary by 12s and Under

Best Documentary by 13s and Over

Review of the Year sponsored by IMDb

Best Family Film of the Year in association with First News