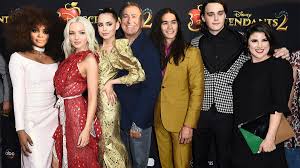 Descendants 2 is back this autumn!

The red-carpet premier was in LA last night and we managed to get our hands on them!

If you’ve never seen it, the series follows the kids of someone of Disney’s most scary villains. The embark on crazy adventures and get up to loads of mischief.

That’s the island all the heroes and villains from every Disney movie ever call home!

Mal tries to be perfect but when she gets fed up, she returns to her rotten roots on the Isle of the Lost where her archenemy Uma (China Anne McClain) has taken her spot as self-proclaimed queen!

Uma is still pretty annoyed that she wasn’t picked to go to Auradon Prep with the other Villain Kids so she stirs up her pirate gang (including Captain Hook’s son Harry) to break the barrier between Isle of the Lost and Auradon!

This would unleash all the villains imprisoned on the Isle, once and for all!

As you can see, there were loads of stars on the red carpet, including Dove Cameron who joined The Lodge earlier this year!

Here’s our favourite tune from the first movie…