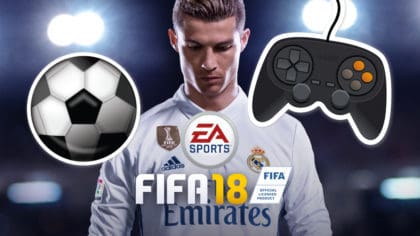 FIFA 18 came out at midnight and we’re seriously excited!

EA Sports have seriously overhauled the graphics for FIFA 18 after working on their new animation system.

Called the ‘motion technology system’, it ensures character movements in the game are identical to real life.

They worked with Real Madrid and Portugal star Cristiano Ronaldo to map his movements.

Ronaldo is replacing Marco Reus and legend Lionel Messi on the cover of the game. That’s because Messi has signed up for Pro Evolution Soccer 2018 this year.

Gamers who are signed up to Microsoft XBOX’s EA Access got early access to the new release on September 21st and Playstation 4 owners got access on September 26th.

Everyone else has had to wait for the nationwide release day, September 29th.

Queues are expected at some GAME Stores which are opening at midnight to celebrate the release of the game.

Click here to see which stores are opening at midnight

Of course, the most important part of FIFA is your team and FIFA 18 gives you more time and space to read the play.

There are new attacks, counter-attacks, and for the first time, you can easily make changes in-game without having to pause.

That means you can sub players super easily.