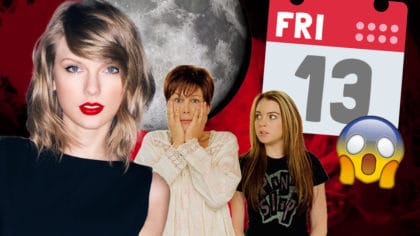 This Friday just so happens to be one of the creepiest on the calendar! That’s because it’s Friday the 13th, a date that’s supposedly filled with bad luck!

Friday the 13th strikes a real fear in people who suffer from paraskevidekatriaphobia, who are convinced that the combination of the day and number brings bad luck.

While no one knows for sure how Friday the 13th began to be so feared, there are numerous theories…

Experts think it starts with the irrational fear of the number 13, a condition called triskaidekaphobia.

Of course, it doesn’t help that some really bad stuff has happened with the number 13 in the past.

Among the most prominent examples is NASA’s Apollo 13 mission. That launched at 13:13 on 4/11/70 (the sum of the digits total to 13) and never landed on the moon because of an explosion in one of its oxygen tanks on April 13th!

Though the crew returned safely back to Earth, for the superstitious, the mission was jinxed because of its close association with the number.

It’s not unlucky for everyone though…

For popstar Taylor Swift, 13 is her fave number!

According to myth, there were thirteen steps leading up to the gallows and a group of witches – a coven – has to have 13 members…

Then there’s the movie, Freaky Friday! In it, Lindsay Lohan’s character swaps bodies with her mum!

All of this superstition costs us lots of money! Every year almost £600 million is lost every Friday the 13th. That’s because some people avoid traveling, working, or even shopping.

Playing: rockabye by the mayries