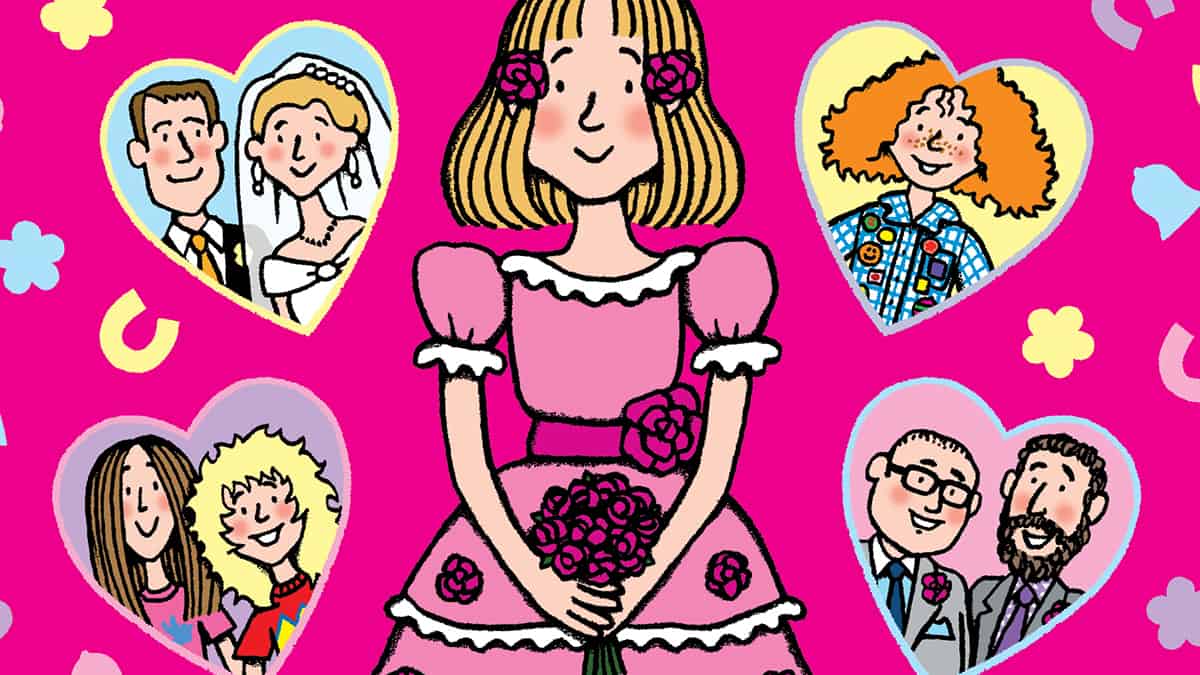 “Some girls love the idea of dressing up as bridesmaids…

But some girls hate the idea of wearing a frilly dress and being on show! Everyone has an opinion about being a bridesmaid, so I got the idea to write this book. And I had lots of fun inventing bridesmaids dresses!”

“I wrote Rent a Bridesmaid in bed!

I let the dog out into the garden, I feed the cat, I have a cup of coffee, I get back into bed in my pyjamas, prop myself up with pillows and write for as long as I can before I have to get up and get ready for the day!”

“The triplets in my book The Butterfly Club would make good bridesmaids.

One of the triplets is called Tina. She has health issues so she’s a little bit smaller than the other two, but they all look identical. I picture the two taller ones, Phil and Maddie, at the front in very pretty bridesmaid dresses and then Tina following them as flower girl. I think they would probably behave themselves!”

“But Tracy Beaker would be the worst bridesmaid!

In the book Rent a Bridesmaid, Mattie is not a good bridesmaid. She manages to spill down her dress and tear the hem, but imagine Tracy Beaker! She’d mess about, want to be the centre of attention and barge into the other bridesmaids. If someone had both Tracy Beaker and Justine Littlewood as their bridesmaids, it would be a disaster!”

“A Rabbit would be the wackiest wedding gift!

There’s a book of mine called Cookie. It’s about a girl called Beauty. The one thing Beauty wants is a pet rabbit. Her dad gives her all sorts of things, but he won’t let her have a pet because they muck up the house. Beauty would think that a rabbit is the best present in the world and an unusual one for a wedding. People have white doves sometimes, but it’s very rare they would have a rabbit!”

“Marigold from The Illustrated Mum would be the most embarrassing guest at a wedding.

Her younger daughter, Dolphin, thinks she’s wonderful, but her older daughter Star finds Marigold a severe embarrassment. I can’t imagine Marigold in a smart wedding outfit. She’d wear something showy and I think Star would cringe and hope that nobody knew she was her daughter!”

The cover star on the latest issue is the amazing Meghan Trainor!

This issue has some star style suggestions from Zoella and her pals!

PLUS it comes with a load of cute posters too!