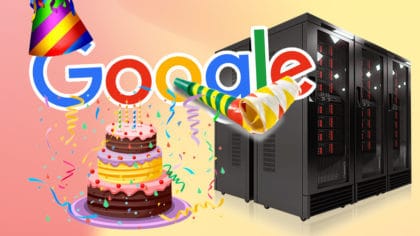 If you search, watch videos, or do pretty much anything online, chances are you soon bump into something run by Google.

In a tiny room at Stanford University in America, Google was born.

That was in 1998 when nobody knew how big it could become. Now the company serves over two-thirds of the world, across almost every country on Earth.

The two people who set-up Google were set the task as homework. They were interested in the way websites on the internet talked to each other.

Now Google own massive warehouses full of high-tech kit to help power itself.

From simple search and YouTube videos to phones, maps, and self-driving cars, Google has totally changed our lives.

The team at Google have released one of their famous Doodles to let people know it’s their birthday.

Did you know that the very first Google Doodle was posted on August 30th 1998?

The original purpose of a Google Doodle was to let users know staff were out of the office and couldn’t fix technical issues.

Now they employ almost 100,000 people around the world.

Playing: i knew you were trouble by taylor swift