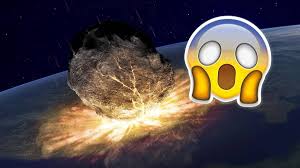 An asteroid the size of a house will fly very close to Earth on Thursday!

Called 2012 TC4, the space rock will pass inside the moon’s orbit and fly right through the area where satellites are. That’s 44,000 km away.

It will give experts a rare chance to rehearse for a real-life strike threat as it passes inside the moon’s orbit.

Despite getting so close, scientists say there’s no chance it could hit us.

We know for sure that there is no possibility for this object to hit the Earth. There is no danger whatsoever.

The rock orbits the Earth, getting a little closer each time. Scientists know that it won’t hit Earth this year, or in 2050, when it next flies by. However, it could hit us the time after that, in 2079.

You won’t be able to see the asteroid with your eyes, or with regular binoculars. Only at European observatories on the night of 11-12th October can it be spotted!

Playing: stuck in a moment you can't get out of - acoustic version by u2