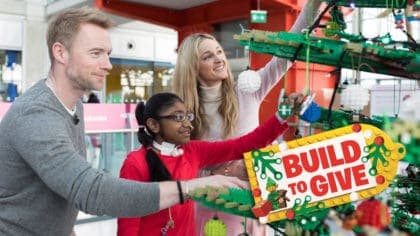 A gigantic Christmas tree has been built out of LEGO bricks at The Evelina London Children’s Hospital!

It took six builders 340 hours to complete the Christmas tree, built from over 72,500 LEGO bricks!

The hospital is one of many that LEGO is supporting with its #BuildToGive campaign, , which hopes to bring some Christmas cheer to the thousands of children in the UK who’ll be spending their Christmas holidays in hospital.

The nation was encouraged to support this by building LEGO decorations and sharing a pic online. We received hundreds of entries from Fun Kids listeners last month!

In return, LEGO will be donating up to 20,000 LEGO sets to children in UK hospitals this Christmas!

Watch the video to see Ronan & Storm Keating putting the finishing touches to the tree at The Evelina London Children’s Hospital.

Playing: the promise by girls aloud