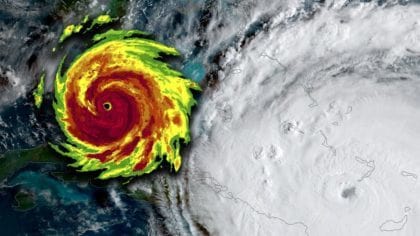 If you’ve been watching the news, you might have heard about hurricanes Harvey and Irma.

They’re the names of two hurricanes that have hit the USA in the past month, first impacting Texas and then Florida.

For their own safety, millions of people have been asked to evacuate their homes and find somewhere else to live whilst the storm passes.

More than three million homes in Florida are without power and parts of the city of Miami are under water.

What is a hurricane and how does one form?

Basically, a hurricane is a large storm that rotates.

It’s made of high speed winds that forms over warm waters in tropical areas, like the Caribbean. To be classified as a hurricane, the winds have to be at least 74 miles per hour and the hurricane has to have an ‘eye’.

The eye is the middle of the hurricane, it’s a small circle where winds are light, the air is calm, and there are no clouds. Don’t let this fool you though! The most dangerous part of the storm is the ‘eye wall’, the part that immediately follows the eye of the storm.

Hurricanes form over warm ocean water. When warm moist air over the water rises, it is replaced by cooler air. The cooler air will then warm and start to rise. This cycle causes huge storm clouds to form!

These storm clouds will begin to rotate with the spin of the Earth… This cycle will continue and the storm clouds and wind speeds will grow causing a hurricane to form.

Why is a hurricane dangerous?

The hurricane itself isn’t dangerous. What’s dangerous is the amount of water it brings to an area in a short space of time and debris that is picked up by it.

Imagine lots of things – bits of metal and wood, road signs and rubbish – all being thrown around at over 100 miles an hour…

Now imagine loads of rain flooding the place at the same time and you’ll understand why hurricanes bring a lot of trouble.

What do people to do prepare for a hurricane?

Many people evacuate the area taking some clothes, food, and their pets with them.

They might flee the state entirely or they might go toan evacuation centre set up by the police and fire departments.

Some people might chose to stay at home though, boarding up their windows and doors and getting into specially crafted bunkers.

These people are the most at risk because sometimes ambulance, police, and fire engines can’t reach them. What’s worse, some of these people might not understand how bad the storm is until it’s too late to leave.

When in doubt, it’s always best to evacuate.

Does the UK get hurricanes?

We might get hurricane-force winds in Europe but our climate makes it very tricky to get an actual hurricane.