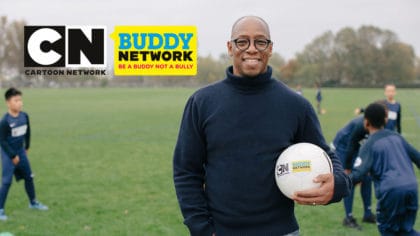 The campaign is called CN Buddy Network and ties in with National Anti-Bullying Week, which is this week in the UK.

It’s important to be a buddy, not a bully. That’s what the people running the campaign want you to take away from it all.

This year sports related bullying also made the top 10 list of main concerns faced by kids like you.

Ian Wright, who played for both Crystal Palace and Arsenal as well as West Ham, said that he teamed up with the CN Buddy Network campaign because he believes bullying isn’t acceptable.

I remember getting bullied back when I was new on the football scene, I was only twenty-two and people were intimated by that. My advice to kids is to speak up against bullying; that’s the first step to showing others you’ve got their back.

Bullying can happen to anyone at any age and can happen at school, on the playground, at home or online and might involve someone pushing you, hitting you, teasing you, taking things from you, calling you names or picking on you for being different.

Remember, bullying isn’t okay and if you get bullied, it’s not your fault.

If you’re being bullied it’s always worth talking to a grown-up. You can seek help by calling Childline on 0800 1111. It’s free, and nobody will know you’ve called them.

You can also visit Cartoon Network’s Be a Buddy page for more information, resources, advice and tips.