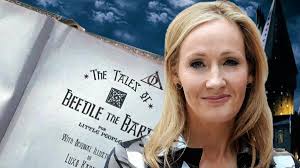 A brand new J.K. Rowling book is coming out!

The Tales of Beedle the Bard is going to get an illustrated version, sold to support kids charity Lumos.

It was first published in 2008 and contains loads of stories from the world of Harry Potter!

‘The Tale of the Three Brothers’ plays a really important role Harry Potter and the Deathly Hallows.

Also included are Professor Albus Dumbledore’s notes on each tale, which appear by kind permission of the Hogwarts Archives!

Chris Riddell will be the illustrator. He’s done loads of books in the past and plans to use watercolour to illustrate J.K. Rowling’s book.

Rebecca McNally, in charge of making books for kids at Bloomsbury said:

It takes extraordinary skill and imagination to illustrate J.K. Rowling’s highly inventive and original book, which has both wonderful, classic-feeling fairy tales and the inimitable, witty and subversive notes of Albus Dumbledore. There was only ever going to be one person for this job – it just had to be the once-in-a-lifetime talent of Chris Riddell.

J.K. Rowling fans will have to wait a little while though as the book isn’t due out until October 2018!