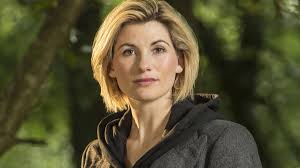 Jodie Whittaker has been announced as the new Doctor Who!

She’s the Thirteenth Time Lord and the first woman to play the role.

The new Doctor’s identity was revealed in a special trailer shown on BBC One after Roger Federer won the Wimbledon men’s singles final.

Jodie replaces Peter Capaldi who took over in 2013 and has just finished his last series.

Lots of people wanted the new Doctor to be a woman.

The Doctor has always been a man in the past, which fans thought was unfair.

Peter Capaldi himself said that he thought a woman should replace him and many of the show’s former stars celebrated the news, including Billie Piper who played Rose and the Sixth Doctor, Colin Baker.

It’s not the only change coming to Doctor Who.

Jodie recently starred in the grown-up series Broadchurch on ITV and Broadchurch creator Chris Chibnall is taking over from Steven Moffat as the Doctor Who showrunner – the person in charge of the show.

Jodie told BBC News: “I’m beyond excited to begin this epic journey – with Chris and with every Whovian on this planet.

“It’s more than an honour to play the Doctor. It means remembering everyone I used to be, while stepping forward to embrace everything the Doctor stands for: hope. I can’t wait.”

Jodie said she’d known about the role for a while but had to keep it a top secret!

Each Doctor has had their own individual look, from David Tenant’s Converse trainers to Matt Smith’s bow tie/fez combo to Peter Capaldi’s long coat.

Jodie has said that the cloak and hoody she wears in the trainer won’t be her final outfit as this hasn’t been decided yet.

Jodie will make her debut on the show in this year’s Christmas special.

As if Christmas Day wasn’t exciting enough, we can’t wait to see it!

Are you excited about Jodie taking over as the Doctor? Let us know in the comments!