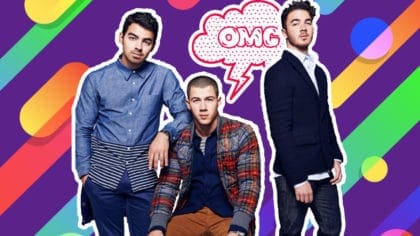 Could there be another Jonas Brothers album on the horizon?

Fans are speculating over the possibility of a reunion after a recent photograph showed the trio together.

The band has re-activated its Instagram page and one tour member has even posted a photo with the caption “Family reunion”!

The Jonas Brothers are Joe, Kevin, and Nick and, yes, they are brothers!

They’ve starred in loads of Disney Channel hits including Camp Rock and their own series, JONAS.

Their last album came out in 2009 and it was called Lines, Vines, and Trying Times. The following year, the three brothers went their separate ways to make music on their own, but never officially broke-up.

In 2012 they came back together to record a fifth album but that was cancelled and the band broke-up in 2013.

However, musician Ryan Liestman posted a picture to social media with the caption ‘family reunion’ and now fans are totally convinced they’re all getting back together.

Whilst not a full-time member, Ryan tours and performs live with the Jo Bros. He plays the keyboards and sings background vocals in the group.

Are you excited for new Jonas Brothers music? Let us know in the comments below!