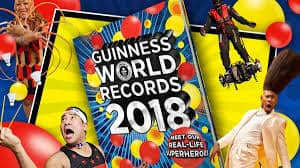 What do a basketball playing bunny, the world’s tallest model, and some shockingly long fingernails all have in common?

The answer is that they’re all world-record breaking and have made the cut for the newly released 2018 Guinness World Records book!

Let’s take a look at some of the top world record holders in this year’s edition!

Ayanna Williams, for example, has the world’s longest fingernails…

She’s 60 and has been growing her fingernails for almost 23 years. They’re now over 5 meters long!

Meanwhile, Ms You, from Jiangsu in China has the world’s longest eyelashes!

Benny Harlem in California, has the tallest high top fade at 52.0cm!

While it makes him stand out from the crowd, it can take him more than two hours to style his hair, plus getting through doors must be a bit of a nightmare…

And Chris Parsons holds three world records. For eating the most amount of marmite, mash, and mustard…

Even Fun Kids presenter Sean has his own world records! He’s got three, two of which are for the most soft toys caught blindfolded in both 30 seconds and in one minute!

You can watch his attempts in our YouTube series below…