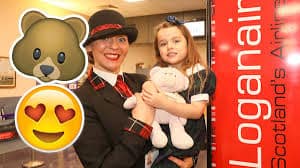 She forgot to put Teddy back in her bag at the security area of the airport, leaving it left behind.

Basically, Teddy got a VIP trip to Kirkwall in Scotland to be reunited with his owner!

On a separate flight to Summer, the bear was later given his own seat and was also given a tour of the flight-deck.

Our cabin crew team quickly tracked down the bear and arranged for him to be on the next service up to Orkney. It was wonderful to see Teddy back in the company of Summer and we’re pleased to have played a role.

That’s what Kay Ryan, who is a commercial director at the airline said.

We hope the bear got his passport stamped too!