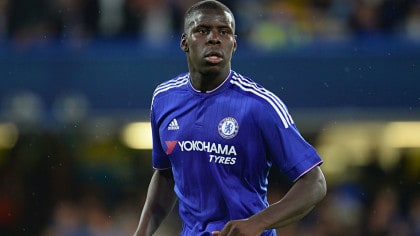 MOTD mag caught up with Kurt!

Hiya, Kurt! Can you tell us what you were like as a kid?

Your bro Lionel plays for Sochaux – what’s the Zouma family like?

Kurt says: “We’re always happy – when I’m with my family I’m always happy. Sometimes we’ll talk about football, but most of time we play PlayStation and things like that!”

Your middle name is Happy – what’s the story behind that?

Kurt says: “My father watched a Jean-Claude Van Damme movie and his character was Kurt, so he told my mother: ‘We’ll call him Kurt and he will be happy.’ So my middle name is Happy!”

You’re known for your power – were you the biggest at school?

Kurt says: “Not at school, no. I was too small, but one year I grew a lot and my body changed. Now I’m stronger. But in the Premier League you have some big guys. Even in the Chelsea team you have Branislav Ivanovic, John Terry and Gary Cahill!”

Did anyone give you a hard tackle to welcome you to Chelsea?

Kurt says: “Yeah, Didier Drogba! He’s very strong guy and very clever. I had a duel with him and he put his body in front and said: ‘Kid, you’re still young. You have a lot to learn!’ I said: ‘Okay chief, sorry!’ I knew I had to go to the gym and do a lot of work because they were too strong for me at first!”

So what’s Diego Costa actually like away from the pitch, Kurt?

Kurt says: “He’s the funniest guy! I like Diego because he’s always joking around. In the training ground and the dressing room he’s always screaming! I can’t understand him because he speaks Spanish, but he’s a really funny guy and I like him!”

There’s also 15 Premier League posters and a guide to the biggest stadiums in Europe!

Plus some awesome prizes up for grabs too!