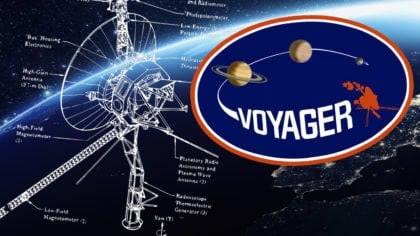 They were launched in 1977 and the information they’ve discovered so far is amazing!

Voyager delivered the first close-up views of Uranus and Neptune, revealed “spokes” in the rings of Saturn, and uncovered details of Jupiter’s storm that had never been seen before!

It also found volcanic plumes on far-flung planets and the potential for life on the moons near Saturn.

Although the mission ended in 1980, NASA kept the spacecraft going…

It also took a really iconic photograph known as ‘Pale Blue Dot’ – that’s us, Earth, circled – from a very long way away!

Voyager 1 is now the most distant man-made object from Earth and it carries something very special; a gold-plated record filled with sounds and pictures from our Earth.

“It carried with a record of human greetings and songs and pictures of our planet that constitute a message from humanity to the Milky Way, to whatever, whoever, finds Voyager — if ever. It will very likely live for billions of years. It could do that. Certainly, the Voyager record could do that.”

It’s a kind of time-capsule intended for whoever happens to find it. There’s even a recording from U.S. President Jimmy Carter on it!

This is a present from a small, distant world, a token of our sounds, our science, our images, our music, our thoughts and our feelings. We are attempting to survive our time so we may live into yours.

Like space? Find out more about it with our podcast series, Deep Space High!

In Intergalactic Weather Watch, we find out all about the Solar Dynamics Observatory, S.T.E.R.E.O. and cluster missions – all types of spacecraft!

Playing: a dream is a wish your heart makes by lily james