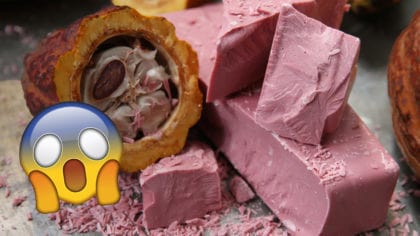 We’ve got some HUGE news – scientists have invented a new FOURTH type of chocolate!

It’s the first new type of chocolate since white chocolate was invented in the 1930s.

As if chocolate being invented wasn’t cool enough, this new one is bright pink!

It uses a ruby cocoa bean and has a flavour of “berry fruitiness and luscious smoothness”.

There are no added colours or flavours in the chocolate, it gets it’s pink colour naturally from the cocoa bean that’s used.

So this isn’t like pink chocolate you might have seen before, which is usually white chocolate with strawberry flavouring, this is a completely new flavour altogether!

Barry Callebaut say Ruby chocolate “offers a totally new taste experience, which is not bitter, milky or sweet, but a tension between berry-fruitiness and luscious smoothness”.

The new flavour was launched at special event for chocolate experts in Shanghai.

Some of the experts that have tried it have described Ruby as ‘sweet’, ‘fresh’ and ‘zingy’.

Scientists at Barry Callebaut have been working for 13 years to develop Ruby chocolate and unlock the bean’s interesting flavour.

The chocolatier now hope that Ruby chocolate will become the fourth chocolate category, alongside milk, white and dark.

It sounds like a story straight out of Charlie and the Chocolate Factory – but it’s 100% real!

We’re not sure exactly when you can expect to see Ruby chocolate on the shelves – but we definitely want to try it when it does!