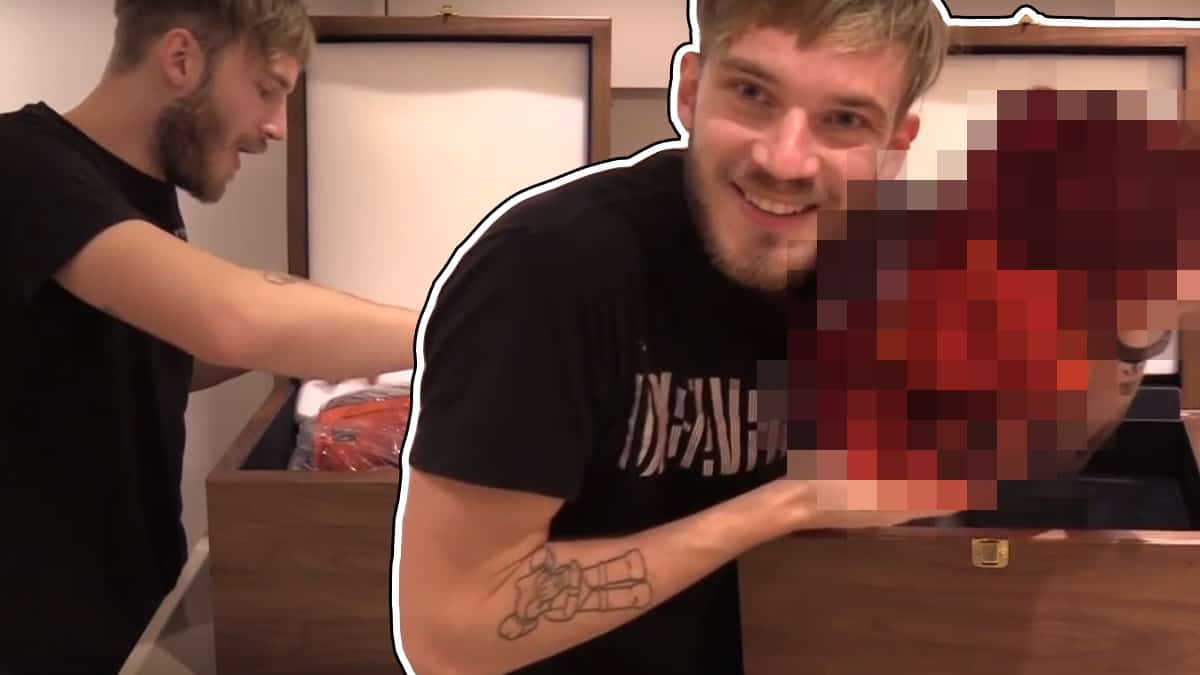 When you get to 100,000 subscribers, you receive a shiny Silver Play Button…

…and if you’ve got one of the biggest channels with 10,000,000 subs you’ll be sent an awesome Diamond Play Button to say thanks!

But this month PewDiePie reached 50,000,000 subscribers – something no YouTube channel has ever achieved before…

The Play Button was flown in from New York to Felix’s house in Brighton, with it’s own body guard because it’s that important!

This one’s even cooler because it’s custom made!

PewDiePie showed him unboxing the Play Button on his channel, which came in a huge (and proper heavy) engraved wooden box. He received a giant Ruby Brofist – along with eight baby Brofists too!

Felix said he’d be giving away the mini Brofist’s to some of his “longest lasting subscribers that are still active” and one to someone who leaves a nice comment on his latest video!

PewDiePie has been pretty critical of YouTube in recent months, complaining that his videos are showing up for subscribers, but he’s put that to one side for now.

Good one, bro … and congrats on the 50M! 👊@pewdiepie don’t forget to check your mail! → https://t.co/plEYEOVXEE pic.twitter.com/JOyaOmBuc7

In the video, he thanks YouTube for giving him everything.

And I don’t want it to seem like just because they did this for me, like all the problems have gone away. Just taking all that aside for a minute, YouTube really has given me everything. It’s given me so many opportunities. It’s made my life from being in a very terrible place to an amazing life that I couldn’t ever have even dreamed of having. It’s thanks to you Bros, but without YouTube none of this would’ve happened. I don’t want to take that for granted. I don’t want to seem ungrateful in that way. YouTube really has given me so much. And it has been an incredible journey that I will never ever forget. I am incredibly proud of reaching 50 million subscribers. I’m proud of so many people. It’s not just me. This is not just me. I don’t want it to seem like that way. I owe a big thanks to YouTube. Thank you.

How sweet is that?

Now we’ve just got to wait for PewDiePie to double his subs and get to 100,000,000 to unlock the PLATINUM Play Button next!