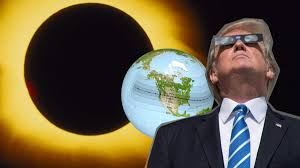 We know what you’re thinking… The Sun vanishing from the sky is a pretty big thing!

Don’t worry, the Sun didn’t ‘vanish’, but it did hide for about three minutes over America earlier this week…

Click here to find out more about the eclipse!

That’s because there was a total eclipse, which is where the moon comes between the Sun and the Earth and blocks its light.

If you were in the Path of Totality, which is basically a very narrow strip of land you could watch the eclipse from, you would see it!

Luckily, this is 2017 and absolutely everyone has a way to share photos…

Even astronauts and clever space tech got to see the solar eclipse!

The photograph above is from Paolo Nespoli, an Italian astronaut on Space Shuttle mission STS-120!

The photo below was taken by Europe’s Meteosat, a series of satellites usually used to track the weather.

Crowds of people also got their glimpse through smartphones, special ‘eclipse glasses’, and pinhole cameras.

This allowed people to see the beauty of a solar eclipse without hurting their eyes!

What is a solar eclipse and why do they happen?

Even the US President and First Lady got involved…

Even if you weren’t in the Path of Totality, you could still see bits of the solar eclipse.

This is the view from the Pointe du Van, in Brittany, France!

So, you might be wondering – when’s the next solar eclipse?

Well, if you want to see a total eclipse like the one in America, you’ll have to wait until 2090…