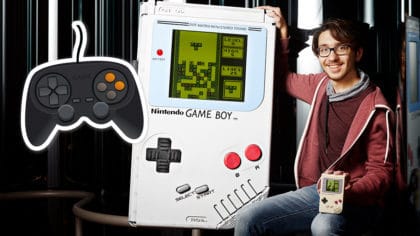 Remember the retro games console that Nintendo were bringing back?

Well, one student in Belgium has taken things a little further…

Ilhan Ünal, who is 21, has created a MASSIVE working Nintendo Game Boy.

Measuring just over one meter tall, Ilhan now holds the Guinness World Records title for the Largest Game Boy in the world.

I was obsessed with my Game Boy as a kid, so I wanted to create something that would put a smile on little Ilhan’s face, and hopefully on the face of anyone who is a big kid at heart.

The monster machine took one week to design on a computer and one month to build in a laboratory.

It can play any game cartridge from the original Game Boy, which is almost 30 years old!

Rather than quick thumbs, players need quick hands, even arms as they negotiate the scaled up buttons!