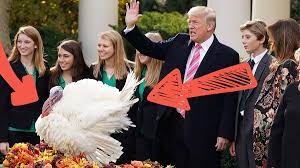 Thanksgiving always falls on the fourth Thursday in November and is a really popular holiday overseas!

The event can be traced back to 1621 where people from England invited Native Americans to a harvest feast.

It’s all about spending time with family and friends and about showing how grateful you are.

It’s common to eat a meal similar to our Christmas dinners, consisting of turkey, stuffing, potatoes, and more!

American football is an important part of Thanksgiving celebrations in the United States, a tradition that goes all the way back to the 1800’s.

Parades also take place, with the world’s largest one happening in New York City right outside a store called Macy’s.

Whilst turkey is a popular choice on the menu, the President traditionally pardons a turkey, saving it from ending up on your dinner plate!

This year the turkey was called ‘Drumstick’ and was pardoned by the current President, Donald Trump.

If you’re interested in the similarities and differences between the UK and US, you’ll love our free podcast series, US-UK Slamdown

Get the series on your phone or tablet and listen whenever you like – at home or in the car!

Playing: for now by sam fischer