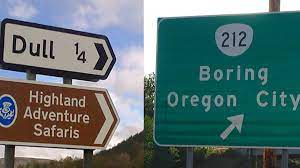 Bland, Dull, and Boring Day was first invented in 2013 and falls on the 9th of August.

The day celebrates the friendship of three places with very funny names… The area of Bland Shire in Australia, Dull in Scotland, and Boring in Oregon in the US!

It’s quite common for towns in the UK to be partnered or twinned with towns elsewhere in the world.

The idea of twin towns came about after the Second World War as a way to promote trade and friendship and to encourage tourism.

Although the towns can’t be officially twinned, they share an unofficial friendship.

Together, they call themselves the League of Extra-ordinary Communities!

Dull is a tiny Highland village with around 84 residents

Boring is a small farming town in Oregon with around 8,000 residents – over 5,542 miles from Dull!

And Bland is a former gold rush area in which has about 6,000 residents.

These aren’t the only places with funny names though!

There’s a place called Accident in Maryland in America, and even Big Bottom Mountain in North Carolina!

We’re even wondering if Dull, Boring, and Bland would also team up with Average…