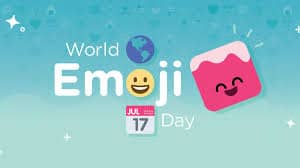 We all love emoji! They’re the cute little smiley faces you put in messages to friends.

Emoji aren’t just on our phones anymore – they’re also on pencil cases, pillows, cakes, and they’re even getting a movie!

It’s held on July 17th because that’s the date shown on Apple’s calendar emoji, and although there are lots of different emoji designs around, we use their emoji designs the most.

People are doing all kinds of things to celebrate Emoji Day, including dressing up as emoji symbols!

Here are some cool facts about those amazing symbols that are totally everywhere!

There are currently 2,666 emojis, including ones for both men and women and skin tone emojis!

There are an estimated 3.2 billion people in the world right now who have regular internet access – that’s like half the planet! – and 92% use emoji regularly.

The Museum of Modern Art owns the original emoji collection but the designs we use most often are supplied by Apple.

Tennis star Andy Murray marked his wedding day by tweeting the story of the day entirely in emoji!

A movie all about emojis comes out on August 4th – The Emoji Movie!

What’s your favourite emoji? Let us know in the comments below!