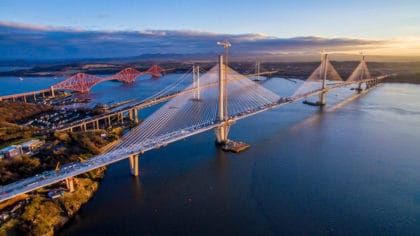 The Queensferry Crossing in Fife in Scotland is now the tallest bridge in the whole of the UK!

It opened today to allow cars to cross for the first ever time but opens officially on Monday with a ceremony featuring the Queen!

The bridge is at 210 metres tall and should last for 120 years. That could be even longer as it has been “designed for maintenance”.

Building a bridge like this isn’t an easy feat! Engineers had to work around-the-clock to get it done on time and one of the hardest parts was making sure the foundations were stable.

The foundations are what helps keep the bridge standing and they’re all underwater! To put those in place, they had to purposely sink massive blocks of steel and then build on top of them.

Here are some really cool photos of the bridge being built! You can see massive sections missing:

Called “one of the world’s great bridges” by the man who invented it, Michael Martin, it’s expected to carry over 24 million vehicles a year.

The bridge took six years to be built and has been describes as ‘incredible’ by the people who made it.

It took 10 million hours to build… That means if one person started in the year 876 and did the whole thing on their own, it would only just be finished today!