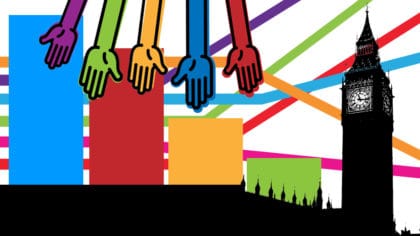 There was a big election in the UK last week!

We told you all about how elections work before, but the result on Thursday was a little more surprising than most people thought.

This can be a pretty confusing time for everyone – including grown-ups and those in charge! – but we’re going to help explain it.

To be in charge of the country, you need 326 seats in the House of Commons. Remember, you win seats by being elected as a Member of Parliament in your constituency.

It last happened in 2010 and the Conservatives, who are blue, and the Liberal Democrats, who are yellow, had to become friends to be in charge.

The Conservative Party has the most seats in this election but are 8 short of the 326 seats they need to form a majority government.

Not having a majority means they’ll have to work with other people again and that puts the Conservative Party in a very tricky position.

When two political parties work together, this is called a coalition.

The Conservatives have 318 seats and the Democratic Unionist Party in Northern Ireland has 10.

Together, it looks like they will form a coalition, putting the Conservatives and Theresa May on 328 seats. That’s over 326, which is just enough to form a government.

They can’t team-up with the Liberal Democrats again because they’ve said they don’t want to work together anymore.

However, the Conservatives can also form a minority government. That means they won’t have 326 seats, but can still be in charge if smaller parties agree to help them.

Basically, when an important issue in Parliament comes up, they would need an agreement that smaller parties promise to support them!

It’s a lot less official than a coalition but it’s sort-of the same thing.

And what if neither of those things can happen?

Well, it looks like we could have another election – and do it all over again!

If you missed it, here are the results from big parties –

You can also check-out our Inside Parliament series to find out more about how Parliament works!

This article was written on Friday as events were unfolding and was updated Monday afternoon. Some of the information in this article may have changed between then, and when you’re reading it. We’re doing our best to update it as events continue to unfold.

Playing: we don't talk about bruno by cast of disney's encanto