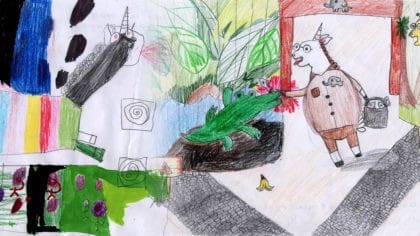 Six talented artists have been revealed as winners of BookTrust’s Pictures First competition!

The reading charity launched the competition in February and the young illustrators have now been picked.

The prize for the six winners is to have their pictures inspire an short story or poem by a writer like John Agard or Geek Girl author Holly Smale.

They’re writing poems and stories to accompany the images.

Dumpling and the Cosmic Wind, picture by Silver Sleightholme aged 10

Engaging in reading isn’t just about the words of a story. Drawings depict the fun in a story and help bring it to life and we’re pleased so many children got involved to send Dumpling on lots of adventures.