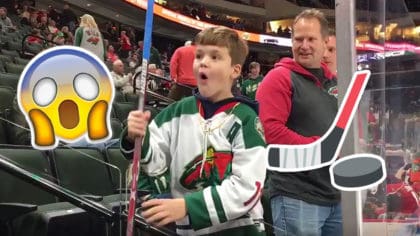 Hockey is a really, really big sport in Canada. It’s probably as popular football or cricket in the UK.

So imagine the surprise of one boy called Jack Armstrong who was given Sam Gagner’s hockey stick after a game!

Armstrong was asking members of the Vancouver Canucks for their hockey sticks before the game even began at XCel Energy Center. Sam saw Jack and decided to offer him something…

The clip became really popular on the internet, mostly because of Armstrong’s stunned reaction after receiving the stick.

But it doesn’t end there!

@89SGagner @Canucks @NHLNetwork Thank you Sam Gagner!! Your gift made my boys night and a fan for life! pic.twitter.com/5yUKrG7U41

As if that wasn’t enough, Gagner replied! Good work, everybody! Jack, we hope you treasure that stick forever! 👏👏👏

My pleasure buddy! Hope you had fun at the game!