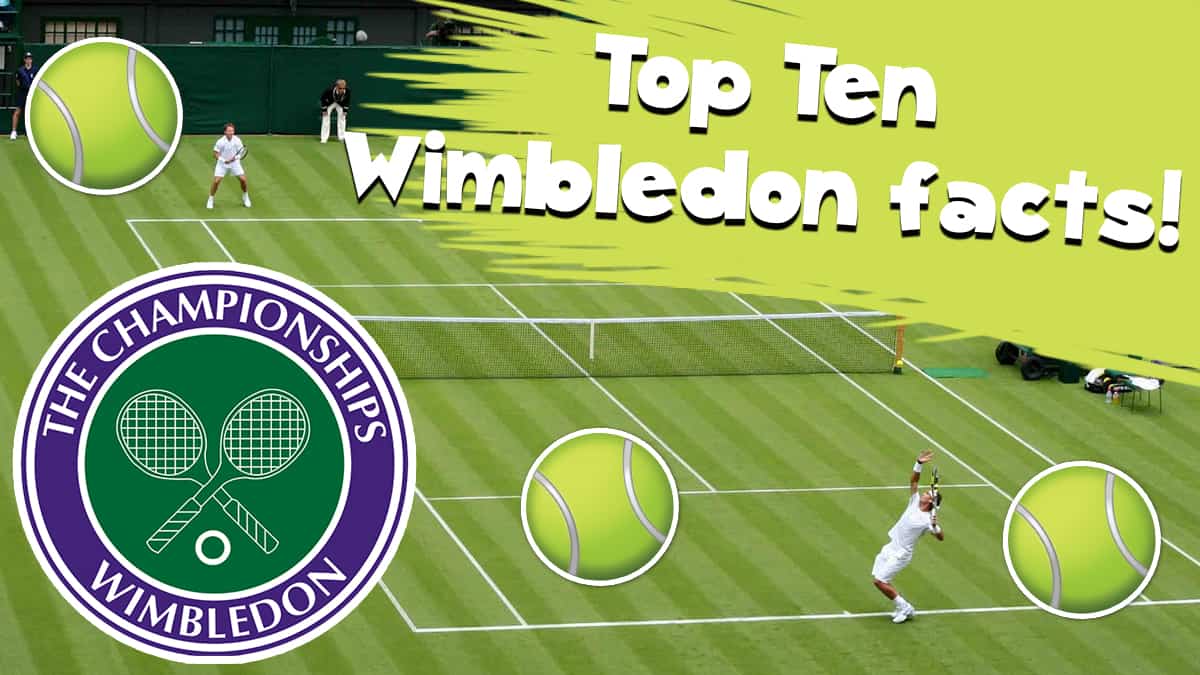 It’s that time of year again! We get two weeks of tip top tennis right here in the UK!

Wimbledon is pretty special if you’re a tennis fan and it’s the one all of the players want to win.

Here are 10 things you might not know about Wimbledon…

Strawberries and cream are almost as important as the rackets and balls at Wimbledon and wow do they serve a few strawberries!

A whopping 140,000 portions are served during the two weeks of the tournament!

Some players let out a huge shout when they hit the ball!

The loudest grunt ever at Wimbledon came from Maria Sharapova in 2009.

She roared a whopping 105 decibels! That’s about as loud as standing next to an accelerating motorcycle!

Unlike sports such as football there’s no full-time whistle so players have to keep going and going until they win 3 sets!

The longest match ever at Wimbledon was between the American player John Isner and French player Nicolas Mahut. It took 11 hours and five minutes and was played over the course of three days! Phew!

During Wimbledon an amazing 54,250 tennis balls are used! They get replaced every seven to nine games to make sure they are in perfect shape.

To make sure they stay tip top, they’re kept in a refrigerator!

Wimbledon used to use white tennis balls but they changes to yellow balls so they were easier to spot on telly!

A lot like your school uniform, there’s a strict dress code at the championships!

The Wimbledon rules state that all players must be dressed head to toe in almost entirely white.

Umpires can even tell players to change if they don’t fit the dress code and they aren’t afraid to!

In 2013 Wimbledon superstar Roger Federer had to switch his trainers because they had orange soles!

It goes back a long way!

The first Wimbledon championship took place in 1877! This means it’s the oldest tennis tournament in the world. Men’s Singles was the only event when it started BUT Ladie’s Single, Men’s & Ladies Doubles soon followed.

To stop them getting in the way of the players there’s a special employee. His name is Rufus and he’s a harris hawk!

Rufus circles the sky above Wimbledon deterring the local pigeons. He’s pretty popular too, with over 5,000 followers on Twitter!

Tennis racket strings are made from something called ‘catgut’…

Catgut is ALMOST as gross as it sounds, it’s made from the intestines of a sheep, goat, pig or cow.

The grass at Wimbledon has to be JUST right.

All year round groundsmen work super hard on making sure all 20 grass courts are perfect!

During the tournament the grass is cut to a height of exactly 8mm so we get to see the very best tennis!

The fastest serve ever at Wimbledon was hit by Sam Groth and the ball travelled and a supersonic 147mph!

The quickest serve in the Ladies’ tennis was hit by Lucie Hradecka who whacked the ball a huge 123 mph!