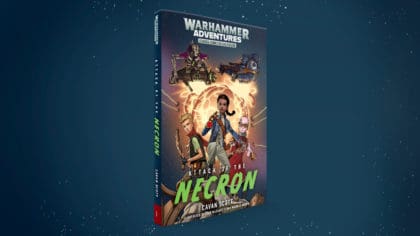 Get ready for Attack of the Necron, the first action-packed story in the Warhammer Adventures: Warped Galaxy series!

It is the 41st Millennium, and humanity’s fate hangs in the balance.

The Imperium of Man is an empire of a million worlds but its strength is an illusion, and the Emperor’s great plan for humanity lies in tatters…

Aliens and traitors close in from every side. The end times beckon.

Separated from her mother, Zelia must escape the doomed world, her only hope a scrambled transmission promising safety at a mysterious place known only as the Emperor’s Seat.

She is joined by a ragtag group of survivors: the street-tough Talen, gadget-obsessed Martian boy Mekki and superintelligent alien-ape Fleapit.

If audiobooks are more your thing, Attack of the Necron is read brilliantly by David Tennant, the tenth incarnation of television’s Doctor Who!