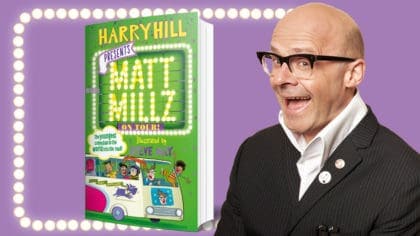 From real-life funny man Harry Hill comes another hilarious adventure about Matt Millz – the youngest stand-up comedian in the world!

The book is called Matt Millz On Tour, it’s the third in the Matt Millz series and it’s out right now.

Matt’s dream of becoming a stand-up comic is fading.

Six months on from his success at the Apollo, the gigs have dried up, and it’s back to the daily drudge of schoolwork for Matt and his pals.

But then his twelve-year-old manager Kitty has a brainwave: if they can persuade their teachers to take a school play up to the Edinburgh Festival, they could hold a comedy night too.

But Matt’s got a rival new school-mate Jamie who is pushing to be in the comedy line-up.

Jamie is good… But is he too good to be true?

Packed with action, clever twists and great characters, this third Matt Millz adventure will appeal to every aspiring young comedian!