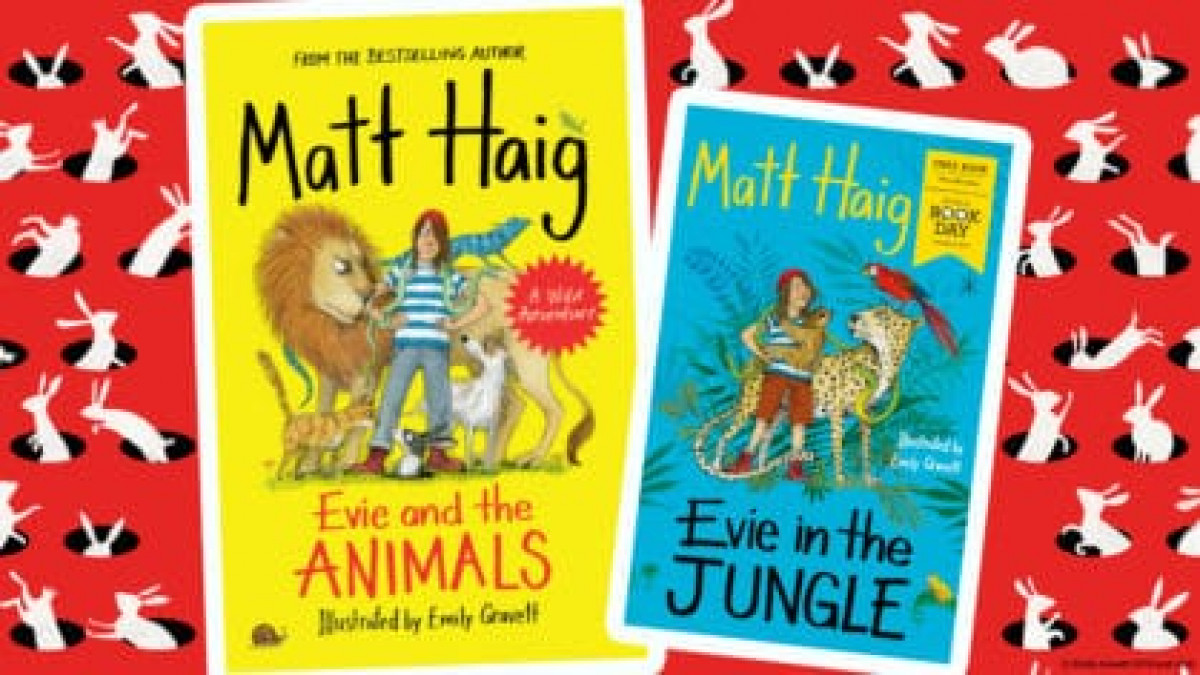 In Evie and the Animals we meet Evie. Eleven-year-old Evie has a talent: a supertalent.

She can HEAR what animals are thinking, and even talk to them. She promises to keep it top secret, but then an evil pet-thief strikes.

Every animal in town is in danger and only by DARING TO BE HERSELF can Evie save her furry and feathered friends.

These brilliant books, written by bestselling Matt Haig, will make you laugh out loud, cheer on Evie and her awesome plans, and fall in love with the weird and wonderful animals that she meets.

Evie in the Jungle is a £1 World Book Day book…

Here’s an exclusive extract from Evie in The Jungle!

Evie was a superstar. That’s what her best friend Ramesh said.

‘You are a superstar,’ he had told her the previous Tuesday, while eating a hummus and falafel sandwich on their favourite bench at Lofting High.

But she wasn’t really. Well, Evie didn’t think so.

She wasn’t a celeb or anything. It was just that a lot of people had heard of her. She had been in newspapers, and on TV. She had been on the cover of the world-famous Nature magazine, and she had over 200,000 followers on Instagram, even though she had only ever posted two photos (one of a sunset and one of an endangered leatherback sea turtle). And every morning the crowd of journalists at her door grew bigger.

The reason for all this fame and unwanted attention was because Evie had a special talent. The talent now had an official name, given by scientists. Inter-species two-way telepathic animal communication. Or, to put it another way, she could talk to animals. With her mind.

Here’s an extract from Evie and The Animals!

After lunch, Evie wanted to be on her own. So she decided to go to the school library. She loved the school library because it had a very large collection of books about nature and wildlife and animals. She remembered she had a book to take back. And the book was the Encyclopaedia of Endangered Species.

She had read it from cover to cover in two days and had got cross when she’d found out about all the different types of tiger that were already extinct, and that all the other types were only just hanging on.

She had got crosser when she had read about leatherback sea turtles – the largest type of sea turtle – nearly being extinct, because they had been around for 110 million years, since the dinosaurs. As modern human beings had only been in existence for 200,000 years – which was nowhere near even one million years – it seemed a bit cheeky of us – rude, even – to be endangering all these other animals who had got here first and had been doing perfectly okay without us.

For some fun activities, downloads and to find out more about Matt Haig’s other books for children, go to kids.matthaig.com

Playing: someone you loved by lewis capaldi