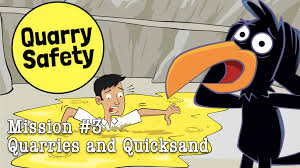 He’s a crow that lives near a huge quarry and is always telling people why they are such dangerous places to play.

After that you should have a good idea why quicksand makes quarries a dangerous place to go.

What is a quarry?

A quarry is a huge site where rocks and sand are dug up and processed to make aggregates which are used to make things like homes, roads and schools.

They look like massive holes that have been dug out of the ground.

And quarries are dangerous because of quicksand?

There are lots of reasons quarries are so dangerous.

There are falling rocks and steep drops which can really hurt you.

Quarries are also usually empty – that means that if you get in trouble or hurt yourself then there might not be any adults around to help you.

Quicksand is just one of the things that make quarries so dangerous.

In a quarry, quicksand is usually a silt pond that looks like the sand at a beach when the tide is out.

It looks a lot like you could make sand castles on it but that couldn’t be further from the truth!

They’re actually very deep and often have a hard crust top which means you might be able to walk on them for a few steps but then you’ll start to sink into it… it’s quicksand!

How do I avoid quicksand?

Just stay out of quarries and you’ll be safe.

There are plenty of much better and safer places to play.

Quarries have fences around them and signs that tell you to keep out, they’re there to keep you safe so just obey the rules and you’ll never be stuck in any quarries quicksand.

Your mission is to make your own quicksand!

Now you know all about quicksand and why it makes quarries so dangerous, it’s time to see it for yourself.

1. Get everything you need

2. Mix the cornflour and water

Mix the two ingredients in your mixing bowl with the spoon in about a 1:1 ratio.

The mixture should look like double cream and have the consistency of honey.

You’ve made your quicksand, this mixture will act just like quicksand does.

Experiment with how it behaves.

If you submerge your hand in it and then move it around a lot (like a person sinking in quicksand and struggling) then you’ll notice that it hardens and it becomes difficult to move in. This is why it’s so hard to escape quicksand once you’re stuck in it!

You should notice that if you keep your hand still and then move slowly out of mixture it’s much easier. Quicksand is harder to get out of the more you move and that’s why people say that the more you struggle in quicksand, the harder it is to escape.

Check back tomorrow for another mission all about staying safe when you’re out and about!