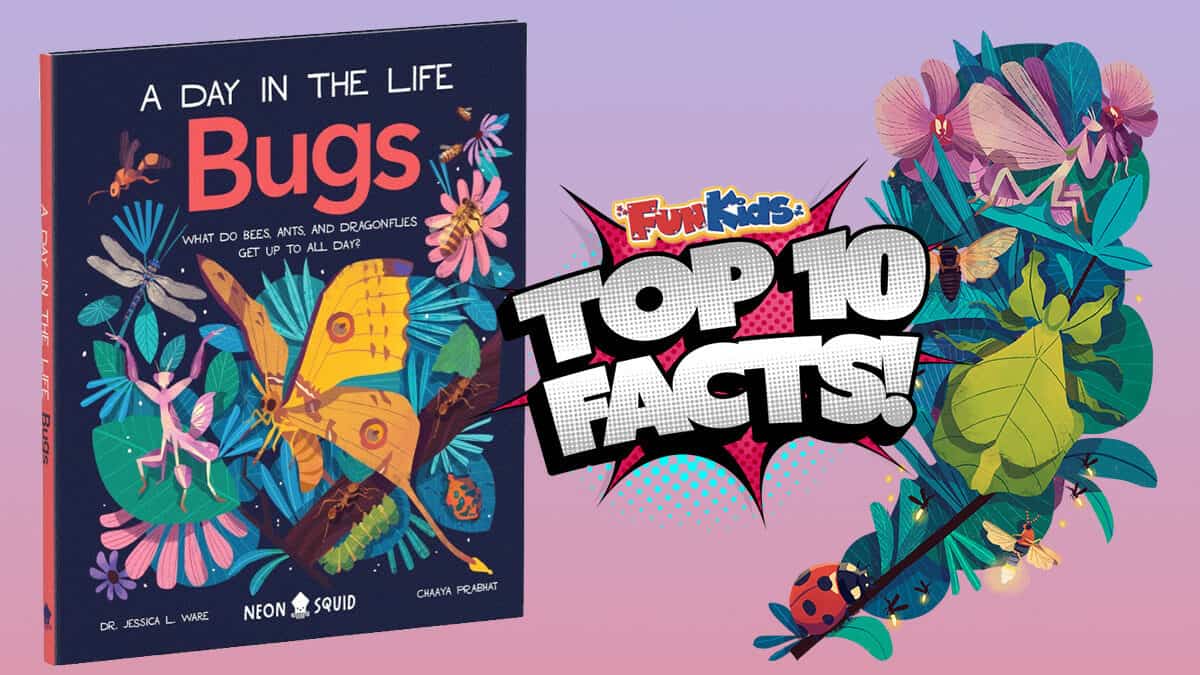 1. Leaf cutter ants keep a fungus garden inside their nest.

There are lots of different types of ants and they are all very clever.

One of them is a leaf cutter ant.

They will clip pieces of leaves from small plants and pile them up. The other ants will carry a piece back to their nest.

The leaf cutter ants keep a fungus garden inside their nest which is used to feed the ants inside!

2. Most caterpillars have 12 eyes!

Most caterpillars have 12 eyes… that’s a lot!

Their eyes are called ocelli.

Even though they have so many eyes, their vision isn’t very good!

Get a copy of Bugs (A Day in the Life) to find out more.

3. Crickets make noise with their wings.

When you’re in a hot country, you can sometimes hear a strange noise…

The chirping noise crickets make is caused when they rub their wings across each other.

Grasshoppers do it too!

4. Some bugs can breathe underwater.

Bugs that can breathe underwater? Now that is clever!

The diving beetle has hairy legs which helps it swim.

There is also a bug called the water scorpion… it isn’t actually a scorpion, it just looks like one.

The water scorpion uses its tail as a snorkel!

5. Periodical cicadas emerge from underground once every 13-17 years.

Imagine only going outside once every 13-17 years…

They have to be careful to be very careful as they are often eaten by birds.

Read more about them in Bugs (A Day in the Life).

Dinosaurs roamed the Earth around 66 million years ago.

However, it is believed that the grasshopper’s ancient ancestors lived before dinosaurs even roamed the Earth.

Scientists found this out because of fossils that they found.

Grasshoppers could be around 300 million years old!

7. Fireflies have their own light pattern!

Each type of firefly has its own pattern of flashing lights.

This is very important to them as it helps them attract a mate.

They can change colour and duration!

Did you know that bees can see FIVE TIMES faster than we can?

It means they can identify different flowers when they are flying really fast.

They want the ones with the sweetest nectar!

Find out more about bees in Bugs (A Day In The Life).

9. The largest bug in the UK is the stag beetle!

The bugs in the UK aren’t usually very big.

However, the stag beetle is huge! It’s the UK’s largest bug.

The scientific name for a stag beetle is a lucanus cervus.

They can sometimes grow up to around 8 centimetres!

10. An entomologist is someone who studies bugs.

If you LOVE bugs and find them really interesting then this job might be for you.

An entomologist is someone who studies bugs.

They travel the world and observe bugs in their natural habitats…

From the rainforest… to the Arctic!

If you want to learn more bug facts, get a copy of Bugs (A Day in the Life) where you’ll find out what bees, ants and dragonflies get up to all day.