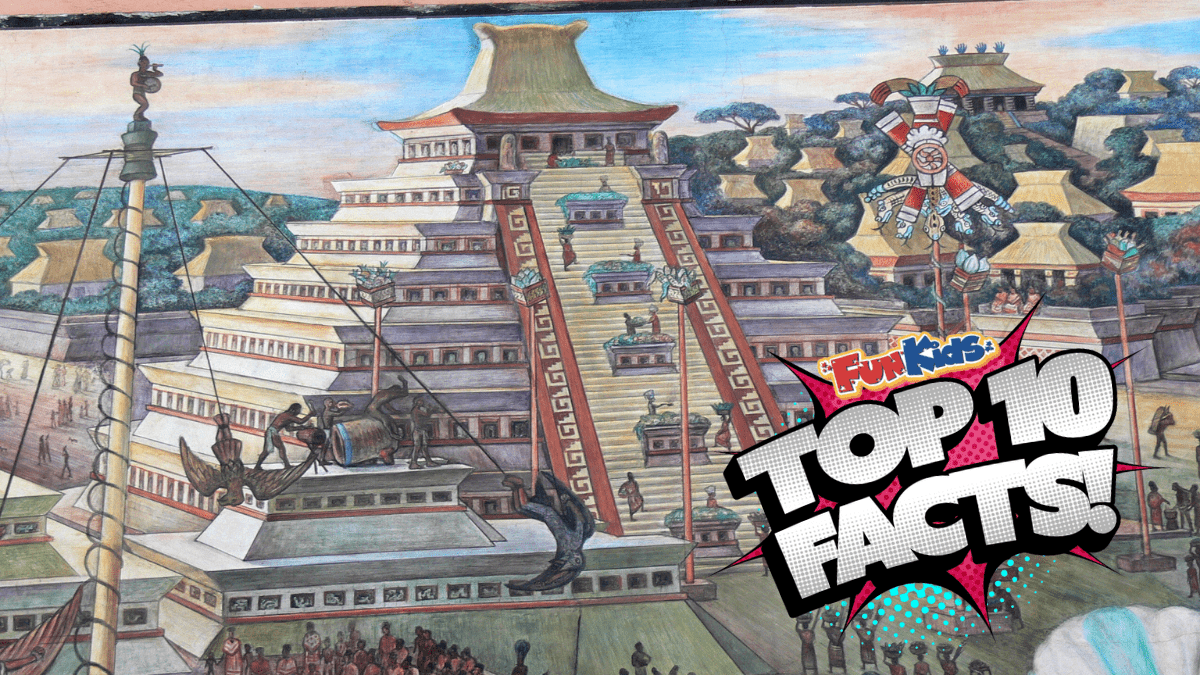 The Aztecs were a northern Mexican tribe and ruled a huge empire.

They were one of the last Native American civilisations before the Spanish conquest in the 16th Century.

The Aztecs were the first people to discover chocolate. They didn’t have sugar so their chocolate was very bitter – they even made hot chocolate that wasn’t sweet and had chilli in it.

They believed the cacao beans that are used to make chocolate were a gift from the gods.

3. The Aztecs worshipped lots of gods

The Aztecs believed in many gods.

There was two very important gods.

The first is Huitzilopochtli, the god of war and the sun. The second was Tlaloc, the rain god.

4. Their capital city was called Tenochtitlánand and was in the same place as Mexico City is today.

Mexico’s capital was built on top of Tenochtitlánand.

200,000 people lived in Tenochtitlan making it the largest city in the Americas before Christopher Columbus arrived.

Love The Aztecs – check out the video below on The Mayans

5. The Aztecs were the first to celebrate ‘Day of the Dead’

Day of the Dead, also known as Dia de los Meurtos, is a Mexican tradition that celebrates the dead.

The Aztecs were the first people to celebrate this tradition.

6. The Aztecs probably died out because of smallpox

When the Spanish invaded the Aztecs’ home they brought a disease called smallpox. It was very infectious and because the Aztecs had never had smallpox before many died.

7. the Aztecs chose the site of their capital, Tenochtitlan, because they saw an eagle eating a snake on a cactus

The Aztecs believed that their god, Huitzilopochtli, would tell them where to build their city when they saw an eagle perched on a cactus, eating a snake.

They saw this on an island in Lake Texcoco and decided to build their city there.

The Aztecs diet was made up of lots of vegetables and they didn’t eat a lot of meat.

They grew corn and beans as well as squash. They also used tomatoes to make casseroles and liked to use chilli in their recipes.

The Aztecs studies the sun, stars and planets and created a very accurate calendar to help them know when to plant and pick their crops. This was 365 days long.

They also had a 260 days calendar that was a religious calendar. This would tell them when to celebrate certain festivals and perform rituals to the gods.

10. There is a reference to The Aztecs on the Mexican Flag

On the Mexican flag you will see an eagle perched on a cactus with a snake in its mouth. This is an Aztec symbol relating to how they knew to settle at Lake Texaco (mentioned in fact 7).

Even the name Mexico is an Aztec word.