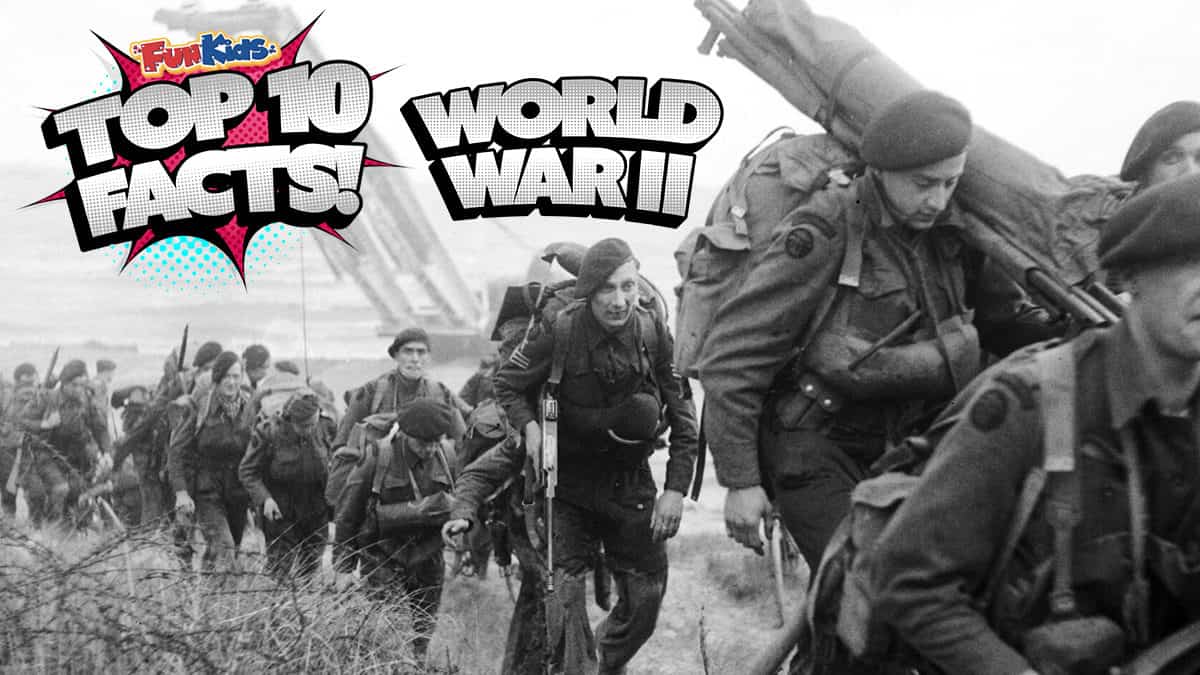 World War 2 started on 1st September 1939 and would carry on for the next 6 years.

It all started when Adolf Hitler, the leader of Germany, along with the Nazi Party, decided they wanted to rule over Europe.

They wanted to get more land and power and so decided to invade Poland.

When Germany refused to stop, Britain and France decided to take action and declare war on Germany.

Other countries then joined in. This is when countries from across the world made a pact to help each other in the war.

4. The war was against The Allies and The Axis.

During the war, countries made a pact to help each other. The two sides were called The Allies and The Axis.

The countries on each side were:

The Allies: Britain, France, Russia, China and the USA.

The Axis: Germany, Italy and Japan.

5. The Holocaust was one of the most terrible events to happen.

The Holocaust was one of the most terrible events to happen in the history of the world. It happened during World War 2.

Adolf Hitler said that he wanted to create a race of “perfect people” which he called the Aryan race. He wanted to rid Germany of Jewish people, people with disabilities and anyone who, he believed, didn’t fit his criteria.

He would send these innocent people to concentration camps and make them work for hours on end. In the worst cases, people would lose their life.

These camps were like prisons and were mainly in Germany and Poland but there were others across Europe.

6. There were lots of major battles.

There were many major battles in World War 2.

Unlike World War 1, which was mainly fought from trenches, World War 2 used the Navy, Air Force and Armies to fight using bombs, missiles and tanks which devastated large areas of land and people.

Some of the main battles were:

7. The War in Europe finished when Germany surrendered.

The war in Europe finished when Germany surrendered.

This was around a week after Adolf Hitler ended his own life.

When the news was announced, there were street parties all across Britain.

After a long six years at war, The Allies won the war when Germany surrendered.

However, the war still went on in places such as the USA and Japan. Japan finally surrendered on 2nd September, 1945.

This was when World War 2 officially ended for all countries.

9. The Victoria Cross award was given to war heroes.

The Victoria Cross award is awarded to the armed forces.

It is awarded for extreme bravery.

There were 182 awarded during World War 2 to lots of heroes.

Each year on 8th May it is VE Day.

This stands for Victory in Europe and was announced by Winston Churchill in 1945.

This is a day where we remember everyone in the armed forces who fought and lost their lives during the war.