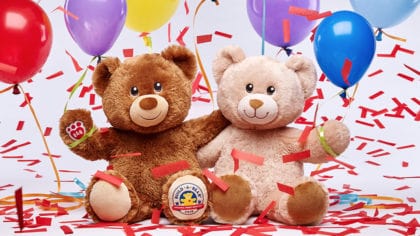 Teddy bears are some of our favourite furry friends and September 9th is all about celebrating them!

We all have that teddy bear we absolutely love and sometimes it’s hard to pick just one… You might have so many teddy bears that you find it hard to move around in your house!

Did you know, teddy bears are named after President Theodore Roosevelt?

They’re called that because he refused to shoot a bear on a hunting trip. His friends called it Teddy’s bear and the name kind of stuck.

That means our cuddly friends have been around for over 100 years, with the very first bear being sold in 1902.

One really fun thing you could do on National Teddy Bear Day is make your own.

Places like Build-a-Bear Workshop are helpful for that kind of thing. They’ve helped make over 150 million bears since the store first opened in 1997!

To celebrate National Teddy Bear Day, over 6,000 furry friends are being donated to Childhood First and other children’s charities in the UK.

Guests of Build-A-Bear Workshop stores can also donate to Build-A-Bear Foundation at checkout and make their own limited-edition National Teddy Bear Day Bear for under £10!