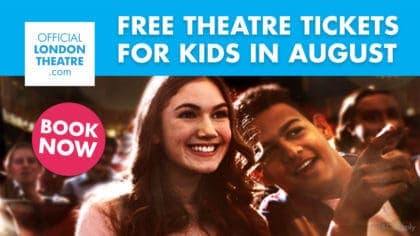 During the whole of August a child aged 16 or under can go free to any participating London theatre show when accompanied by a full-paying adult.

Plus an additional two children can also go for half-price! And best of all, there are absolutely no sneaky booking or postage fees when you book online.

This year you can once again see the very best shows around, including the likes of Wicked, Horrible Histories, Paw Patrol Live, the Tiger Who Came to Tea, and more!

These are just a few of our favourites but there are loads more shows you can go to! To see more, visit the official Kids Week website.

42nd Street follows young Peggy Sawyer, fresh off the bus from small-town America and just another face in the chorus line on Broadway’s newest show. But when the leading lady gets injured, Peggy might just have the shot at stardom she’s always dreamed of…

Everybody’s Talking About Jamie is a modern day fairytale, based on the true story of a 16 year-old with a secret to tell – and dreams to realise.

With catchy new songs by Dan Gillespie Sells, lead singer-songwriter of The Feeling, and writer Tom MacRae, Everybody’s Talking About Jamie is the musical tale of Jamie New: sixteen, on the edge of possibility, not quite fitting in on a council estate in Sheffield… but with big aspirations.

But supported by his brilliant loving mum and surrounded by his friends, Jamie overcomes prejudice, beats the bullies, and steps out of the darkness into the spotlight to become a sensation.

The Play That Goes Wrong

The Play That Goes Wrong follows the antics of the Cornley Polytechnic Drama Society, who are trying their very best to stage a production of a 1920s murder mystery, similar in ilk to other West End shows.

But as the show’s title might suggest, this is not as easy as it sounds, with everything that can go wrong… well, doing just that. Watch out for collapsing sets, forgotten lines, broken fourth walls, absent props and unfortunate injuries aplenty.

Despite the setbacks, the actors struggle bravely to reach the final curtain, in events packed with slapstick, finely-tuned fast and a wealth of physical comedy. Rib-tickling guaranteed.

Presented by Flying Music and Adrian Grant, and a firm theatregoers’ favourite in the West End, this thrilling musical is a stage and video spectacular celebrating the legendary career of the king of pop – Michael Jackson – at the Lyric Theatre.

The show features more than 20 performers, with a full company of singers, dancers and a live band to revel in the music of Michael Jackson and The Jackson 5.