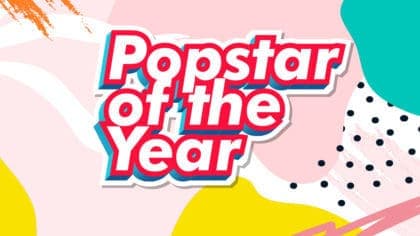 2018 was an ace year for music! On Friday, Bex counted down the top fifteen acts of the year as voted for by you!

If you didn’t catch who won live on Fun Kids, we’ve put the whole list below!

Remember, there were over forty acts to vote for and only fifteen places in our countdown.

In fifteenth place was Sia, followed by Camilla Cabello in fourteenth.

In thirteenth place was George’s pick, Rita Ora. She’s had a really good year, releasing songs like Anywhere and Let You Love Me.

In twelfth place was JoJo Siwa, followed by Katy Perry in eleventh place, and music producer and DJ Marshmello in tenth place.

In at number nine were the KIDZ BOP Kids. They’re the band filled with people just like you who sing and cover really popular songs. Their new album even has a few originals on it!

Bruno Mars was in at number eight and in at number seven was Anna Louise’s choice, Jess Glynne. Jess has had a good year too, releasing songs like Thursday, Hold My Hand, and I’ll Be There.

In at number six, Taylor Swift! This one shocked us all!

Number five was Anne-Marie, championed by Dan! Anne-Marie’s had loads of songs this year and has been really popular. Perfect to Me, 2002, and Friends are all hers!

Ed Sheeran came in at number four, but the big shock was Little Mix in at number three. Little Mix came first in last year’s Popstar of The Year competition and had a new album out this year too. Bex wasn’t very happy to find out they didn’t win!

We play Shotgun a lot on Fun Kids, but Ariana’s had a great year too, releasing songs like Thank U, Next at the end of 2018.

Conor loves George Ezra, Sean loves Ariana Grande, but there could only be one winner…

In second place was George Ezra, meaning your Popstar of The Year 2018 was Ariana Grande!

If you loved Popstar of The Year, you should totally check out the Pop 7 at 7 on Fun Kids!

It’s a countdown, just like Popstar of The Year but of the seven hottest tunes in the world at 7pm every day.

Conor counts down the songs revealing who the hottest popstar in the world right now is at 7:30pm every day.