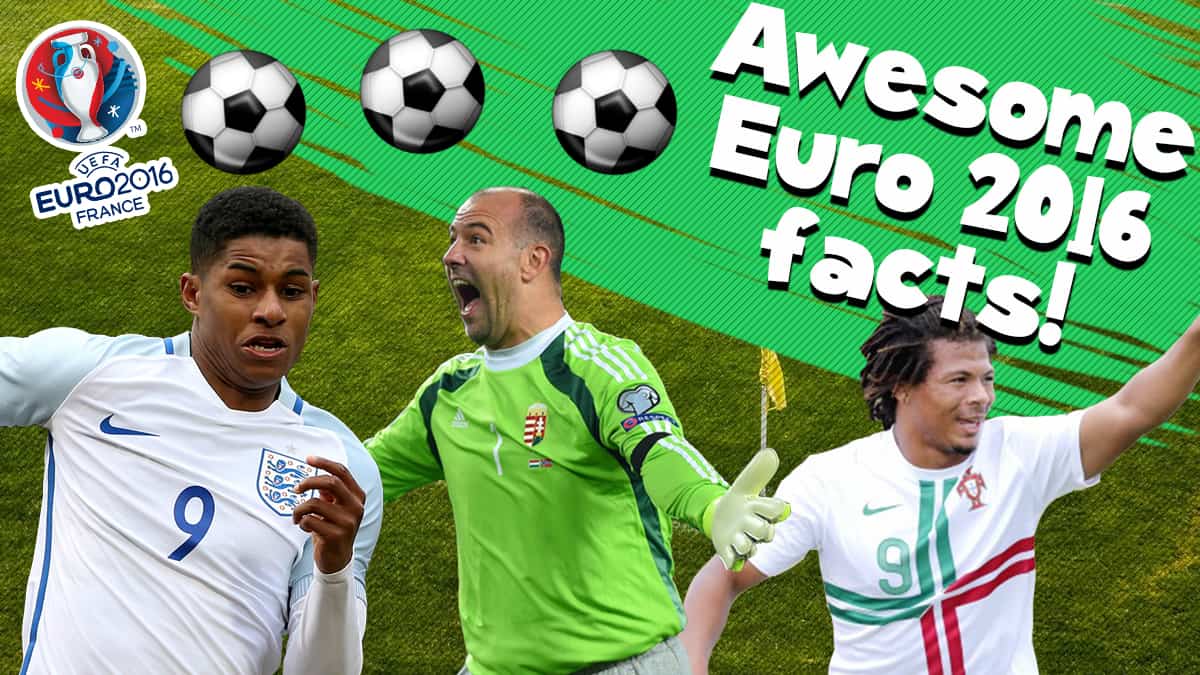 The Euros kick off on Friday evening with France taking on Romania!

The youngest player at the tournament is England’s very own Marcus Rashford!

Marcus is only 18 years old!

He only played his first game for Manchester United in February but was so good for them at the end of the season he’s made it into the England team!

Plus England have the youngest squad overall!

There are also two other teenagers at the tournament, Portugal’s Renato Sanches and Emre Mor from Turkey.

The oldest man at the tournament on the other hand is Mr Gabor Kiraly!

He’s the Hungary goalkeeper and if he plays he will be the first ever 40 year old to play at the Euros!

The tallest player at the Euros is Costel Pantilimon from Romania!

You might recognise Costel, he’s played in the Premier League for Manchester City and Sunderland.

Costel is 2.03m tall! That’s taller than the deep end at your swimming pool!

He’s the official mascot for the tournament!

The French public voted to choose his name and a whopping 48% went with Super Victor!

Turkey have quite a special record at the Euros!

In 1996 their first time, they made the Group Stage, 2000 it was the Quarter-final, the Semi-final in 2008. So that means they MUST get into the final this time, right?

If you were asked to name the team out of all 24 teams at the Euros that had gone the longest with losing you’d probably say one of the big teams like Spain or France, wouldn’t you?

They haven’t lost in 11 games and they’ll be hoping they can keep up that form.

In 2006 Switzerland were the first team EVER to miss every penalty in a shoot out as they lost to Romania.

Surely that won’t happen again with players like Shaqiri on their side?

Wales are at a major tournament for the first time since 1958!

It’s been a long wait for Welsh fans and they owe most of their success to that man in the picture above, Gareth Bale.

Bale is a total superstar who plays his club football for Real Madrid.

He scored 7 of Wale’s 11 goals in qualifying to help them reach the Euros!

Another Real Madrid star, Cristiano Ronaldo has got his eye on a couple of records at this tournament…

He could become the first player ever to score at 4 European Championships PLUS he’s only 3 goals off the all-time record which is held by Michael Platini.

Thousands of kids in France are going to get the chance to watch matches for free!

Each host city has 2,000 tickets to give away to children who might not otherwise be able to afford the chance to go.

Dan from Fun Kids has made this video about things that you might have missed from this year’s Euros!