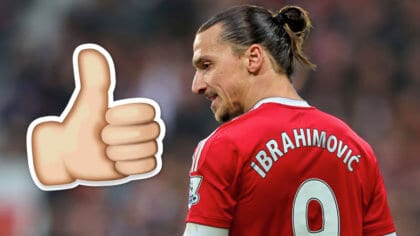 The Super Swede carried on his brilliant start to his Premier League Career!

He scored his 2nd and 3rd goals of the season, to help Man United beat Southampton and go top of the league.

For years now he’s been one of the best in the world, he’s now 34 but has the imagination of a 7-year-old, properly thinking he’s a Super Hero!

He’s already won the league in Italy, Spain and France, Man United are hoping that he can summon his super powers to help them win their first league title in 3 years!

For the last few years, Sunderland have been in turmoil!

The fans have had to get used to fighting relegation pretty much every season.

They’ve had 9 managers in the last 5 years!

This season they hired David Moyes, hoping for stability, calmness and a relaxed midtable season.

But they’ve had 2 losses so far, the last being a really disappointing home defeat by their recently promoted local rivals Middlesbrough.