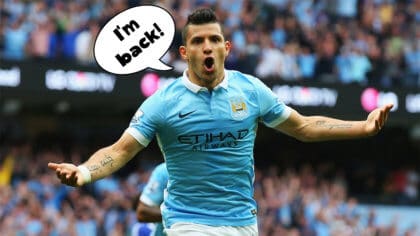 The Argentine had not found the net for 6 games before striking twice against West Brom to help give City a 4-0 win!

The first: a razor-sharp snap-shot, straight into the bottom corner, the second: a bending stunner from outside of the box.

Aguero can score all kinds of goals, and is probably the best striker in the league right now

And he’s in probably the best team too.

Which means it probably won’t be the last time he’s my hit for the week!

A phrase often rattled out by commentators is ‘the more you shoot, the more you score’, and in theory it should work.

But recently, Ibrahimovic found out it’s not always true.

At the weekend, desperate to make the break through and score his first goal in 6 games, Zlatan had 12 shots on goal against Burnley, and still couldn’t score.

As a striker, if he can’t score, maybe it’s time for the veteran to hang up his boots, as he would be better at anything that playing football right now.

Except fishing, of course, because he’d probably struggle to get anything in the net there too.