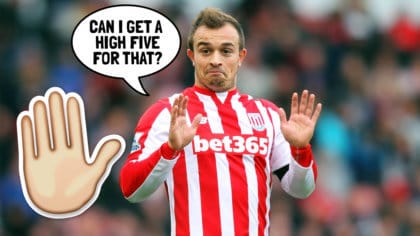 The shining light in a very dark start of Stoke’s season has been Xherdan Shaqiri.

After a very disappointing start of the campaign, the Potters are finally picking up results, and the Superb Swissman has been the saviour.

Against Hull City this weekend, Shaqiri was the superhero, scoring two goals to beat the Tigers, both stunning strikes from outside the box, into the very top corner.

Like all good Superheroes, Shariqi has his own power…. Spiderman has his webby wrists, Superman has his cape, Thor has his Hammer, Shaqiri has his left foot.

This weekend Man United ended up with their worst result of the season so far.

The Red Devils were humilated by Chelsea, suffering a 4-0 defeat.

Defender Chris Smalling was to blame for two goals, Ibrahimovic went missing for most of the game, and the £90 million pound player Paul Pogba (although actually stepping onto the pitch) became invisible as soon as he crossed the white line.

This was United Boss’ Jose Mourinho first game back at Chelsea since he failed spectacularly in London last year.

I’m sure after that disaster, he thought he would never have a team play as bad at Stamford Bridge as his Blues did last season.

His United players proved him wrong this weekend though.

Playing: every heartbeat by pete tong