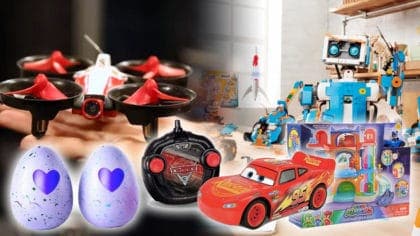 It was the hottest day of the year yesterday but some grown ups are already thinking about Christmas!

Almost a third of grown ups have started planning presents, despite the holidays being over half a year away…

Some clever people have also worked out what’s likely to be in your Christmas letter! Here’s a few top picks for 2017!

A must for PJ Masks fans, activate goggles for red owl vision or trap villains in the tree snarls!

The Spyscope doubles up as a fur-ball shooter. Includes a Catboy Figure and a Cat Car Vehicle.

Download the free app, place a smartphone in the headset, and start piloting like a drone racing professional with a livestream from the camera on the drone.

Get on the Piston Cup Racing circuit and help the legendary Lightning McQueen defeat his new rival Jackson Storm with your very own Giant McQueen race car!

This one channel radio controlled Giant Lightning McQueen has full movement, a turbo speed function, is 1:12 scale and measures 33cm in length.

Hold the egg, rub the heart and watch it hatch! From stocking-filler blind bags to 4- and 6-packs plus a Hatchery Nursery, the range has something for every Hatchimals fan!

There are five BOOST models to create, including Vernie the robot, all of which can be brought to life by coding through the free app…

Playing: we are the robots by scotty and lulu